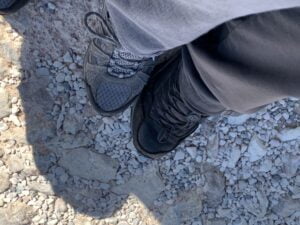 I’m not sure that we recognize courage anymore. What it looks like? How it’s formed in the first step taken toward a new, yet unknown life.

My brother Barry was courageous. Oh, I know, you are thinking about his giving his life for his country—the “last full measure.” I’m not.

I’m thinking about a young man, age 19, who wrote home while serving in Vietnam to say, “I know there is meaning in this life. I think I might find it here,” with accompanying pictures of rice fields and farmers.

I wonder if we have the courage to ask these questions today. Questions of meaning and purpose in times of conflict, and fear about life and death, and worry over the end of institutions we hold dear—like the church. Could we set aside our fear long enough to see and hear something new? Open ourselves to what might be seeded and growing right in front of us?

The writer of the New Testament letter to the Hebrews was speaking to people who were rightly afraid about the events and times they were living in:  persecution, violence, destructive empire, oppression. They were sure that new disasters would come, just not how or when.

The writer recites a list of the “faithful.” Calling them the great cloud of witnesses. Asking us, “what did they do?”

Answering: They took a first step. God called them to go beyond what was assumed and known. They opened themselves to God’s call to “go!” — becoming sojourners in faith.

Why, because God had promised to go with them. God had called them to move beyond the known to enter a promise unseen. To believe life does have meaning and purpose, as Barry did, as I do — in this moment and into the next, even if there is pain and suffering along the way, and grief surrounds us, and the promise takes a very long time. It takes courage to step out in faith to believe in unseen things.