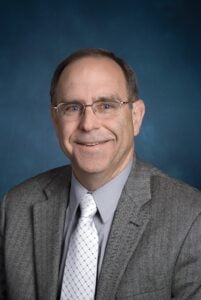 Indianapolis, Indiana – On January 11, Rick D. Reisinger, President of Disciples Church Extension Fund (DCEF), shared his plans with the DCEF Board and staff to retire at year’s end –December 31.

“This decision has been a long time in coming and is the result of a very personal discernment process,” Rick notes. “My wife and children have been after me for quite a while to spend more time with them and my grandchildren. I am thankful for the grace they’ve shown me as I’ve worked this out. I think the time to take this step is right, both for me and this ministry.”

Reisinger joined the Board of Church Extension, as it was then called, as an intern in 1975. Even as a teenager he knew he wanted to serve the church he had grown up in but not as a pastor as his father and both grandfathers had. Instead, following graduation from Culver-Stockton College with a major in business administration and economics, Rick joined the staff a year later in the areas of treasury, accounting and investments. In the 45 years since, he has worked in every aspect of the ministry in a variety of roles including, but not limited to, Assistant Treasurer (1977), Secretary and Assistant Treasurer (1988), Executive Vice President and Secretary (1995), Executive Vice President and Treasurer (2001) and President (2012).

“It has been my honor to serve congregations, regions, and other ministries and organizations by managing financial responsibilities to support their work and inspire and empower them to create Holy Places where people connect with God, each other and the community,” Rick explains. “I thank current and former staff, board members and church-wide leaders who made this possible, especially during the stressful times of economic crises we’ve experienced over the last 40 years.”