“At Least” is not an Option

In my late 20s, my father died.  Suddenly.  Of a heart-attack.  On a Thursday.  I had spoken to him four days earlier and we discussed my planned visit home the following weekend and the things we were going to do together.  Then, in an instant, he was gone.  In the aftermath, many well-meaning friends said “at least” a lot.  At least he didn’t suffer, as if those magical words somehow softened the blow.  Through that experience, and my many years dealing with grief as a pastor, I acknowledge that all losses are difficult and painful.  There is no merit in trying to rank them.  There is only difference and distinction, which does not require value judgment.  The biggest distinction is timing.  With prolonged suffering before the loss, there is much pain in the process but also a chance to say good-bye and have some semblance of closure.  With a sudden loss, there is no preceding pain process, but also no closure nor chance for “last words.”  In both cases, however, there is nothing good comes from saying “at least.”  “At least you had the chance to say good-bye” rings as hollow as “At least they didn’t suffer.” 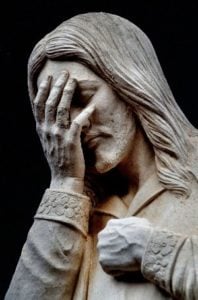 So it is noteworthy, and not surprising, what Jesus does – and doesn’t – do when Lazarus died.  Jesus arrived in Bethany, Lazarus’ hometown, 4 days after Lazarus’ death.  The entire town was gathered around the cemetery, so well-loved was Lazarus in his community.  When Jesus arrived, he was greeted by people in the throes of grief.  What Jesus didn’t do was say “at least.”  He didn’t say “At least you had some good years with Lazarus,” or “At least his death is bringing you all together,” or “At least there are many other love-able people in this town.”  Instead, he wept.  That’s right, he sat down with the crying people and cried with them.  John 11:35 is the shortest verse in the entire bible and it simply reads: Jesus wept.

Consider the power of that gesture.  Jesus knew he was going to raise Lazarus.  He knew this wasn’t the end.  But before he did anything, he acknowledged the pain and hurt of a people broken by grief.  He didn’t try and rush them through it.  Nor did he try to put their loss in some kind of perspective.  He just honored the reality of their present moment – which was all they could see at that moment.

What the Corona pandemic has wrought upon us has been a thousand “sudden” losses.  In the blink of an eye, preschoolers were uprooted from their teachers; college students were forced to abandon their friends and return home.  Sports seasons were instantly halted, with coaches and players unable to prepare for the separation.  Seniors, in both high school and college, are facing the reality of not having in-person graduation which is something the mind simply cannot compute.  Graduation is one of the few classic moments in American culture – a coming-of-age event that we all hold in our vault of important memories.  Not one student, teacher, athlete, coach, director or performer was thinking “This might be the last chance we’re going to play together (or sing together; or perform together; or study together).”  And that is a big deal.

Today, we begin week 2 of our governor’s order to “shelter in place.”  In my own household, all three of our children are deeply grieving the loss of their physical connections to friends – even though they don’t always articulate it.  My wife and I find ourselves trying to convince them that when things get back “to normal” there will be opportunities to have closure on the significant transitions that have transpired.  And I also find myself using the words “at least.”  To my eldest son I heard myself say, “If your show choir season ends now, at least your last performance was the best of the year.”  Even as I hear these words coming from my mouth, I know they are really meant to make me feel better, just as those who said to me all those years ago, “At least your dad didn’t suffer,” were their attempts to make themselves feel better.

Which brings us back to Jesus and the community around Lazarus.  Sometimes we just need to cry.  Even though we may pride ourselves on being stoic in our behavior, there is something innate in being human that simply needs to grieve the loss of something valuable.  And we crave, and long for, the space in which to do that even if we are not always conscious of that reality.  St. Ignatius of Loyola said there are 3 reasons why we cry.  First, we cry because we are sad for the sufferings of Christ.  Second, we cry when we are confronted with the reality of our own sin.  And third… we cry when we experience suffering in the world.  That last one seems especially applicable today.  We grieve the weight of a thousand losses inflicted upon us because of this virus.  We grieve them without placing blame.  And we grieve them without saying “at least.”  We simply grieve them.

Which is entirely okay, or else scripture wouldn’t have devoted an entire verse to just two simple words – Jesus wept.