What do Moses and Jimmy Stewart have in common?  More than we might think.  This past weekend we focused on Deuteronomy 26 in which God, through Moses, reminds the people of God to bring the “first fruits” of their harvests as an offering to the Lord.  This was to ensure they would not forget that it was God who provided them the land in which to live; that it was God who was the source of their bounty.  But it wasn’t enough simply to bring the first fruits as an offering for Moses.  As the people presented these offerings to the priest, they were to recite a litany.  These words essentially traced their history from their journey into Egypt; their rise in number over time; their subsequent enslavement by the Egyptians; the harsh treatment they suffered; how God heard their cries and delivered them, and ultimately led them to a promised land.  The litany was an acknowledgement of what God had done for them and it was because of their recognition of this, that they were inspired to give first fruits back to God. 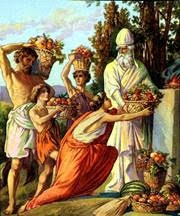 It was almost as though, for Moses, the reciting of the litany was just as important – if not more – than the actual gift given.  In fact, there are just three verses dedicated to the giving of the gift.  Yet there are twice as many (six total) verses devoted to the explanation of the litany of God’s provision.  Giving the first fruits of the harvest is what they are to do.  But the how and the why they do it is clearly revealed by the words of remembrance of God’s saving activity in their lives. 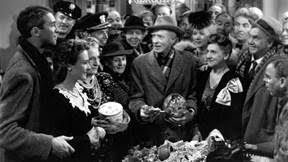 Which brings us to Jimmy Stewart.  He plays George Bailey in the uber famous Christmas movie It’s a Wonderful Life.  In depression era upstate New York, George perpetually sacrifices his own dreams and hoped-for adventures for the sake of others.  As the director of the family-run savings and loan, he uses his bank to help countless people in town through their tough times.  Toward the end of the movie, it is discovered the money is missing and if it is not found, the savings and loan will go under and George himself will be sent to jail.  Yet in the climactic scene the townspeople rush to George’s aid, bringing their spare cash to more than make up for the missing money.  One of the townspeople, as he marches to table full of piled high with money and surrounded by a throng of his neighbors singing “Auld Lang Syne” slaps down his monetary contribution and says, loud enough for everyone to hear, “I wouldn’t have a roof over my head, George, if it weren’t for you!”  And it is though his saying those words is just as important as the gift he’s given.  It is his own litany and recitation of what was done for him.  And that recognition of what was done for him is the motivation for the generosity he expresses in the moment.

How many times, when we give anything – a favor to a friend; a gift to someone in need; an offering to the church – do we recite a litany of our own?  And what would our own litany sound like?  How often do we bring to our consciousness the acts of grace that have delivered us to where we are today?  We can be forced to undertake any action.  We can become accustomed, through habit, to do anything.  But to grow into spiritually mature people of faith, we must be intentional about confessing our dependence on the grace of God in our past for wherever it is that we stand today.  I believe that is why Moses went to the trouble of describing the litany of remembrance the people were to recite as they gave their offerings to God.  And I believe it’s what that townsperson from Bedford Falls understood as he gave his gift to George Bailey.  May we likewise learn from both as we seek to cultivate our own hearts of generosity.