As the National Council of Churches works to end racism, the upcoming 2018 midterm elections provide an opportunity to curtail the systemic racism that is embedded in many of our local and state governments as well as in the federal government.

To do so, our congregations must become active in their communities to help increase voter turnout. Over the past 60 years, only about 40% of registered voters turn out for midterm elections.

Every other Tuesday beginning on September 4 until election day, NCC will present a webinar series to provide constituents with resources and tools to develop a non-partisan get-out-the-vote campaign that can make a measurable difference in their community. Topics will include organizing non-partisan candidate forums, understanding what congregations can and cannot do during elections, and strategies to improve local voter turnout. Attendees will be able to participate in the live webinars as well as have access to the playback following each recording.

The five webinars will be hosted by LaKesha Womack and will feature a subject matter expert as her guest.

Why register? We will be sending out information on how to participate prior to each webinar.  Be sure to register so you will receive all the information.

To kick off the National Council of Church’s Community Engagement webinar series, Associate General Secretary Rev. Aundreia Alexander, Esq. will join LaKesha Womack for a conversation on what’s at stake during the 2018 midterm Elections. Understanding the critical issues to be considered during the upcoming election will help to frame our conversations with voters and to encourage them to cast ballots.

LaKesha Womack has a Bachelor’s degree in Political Science from Vanderbilt University, is a graduate of the Women’s Campaign School at Yale University, is an Organizing for Action Community Engagement Fellow, and has worked on numerous campaigns across the country. She is also the author of nine books including #CommonSense Campaigning and UnLynched: An Economic Empowerment Doctrine for African Americans. Currently, LaKesha works as a Consultant with Womack Consulting Group. 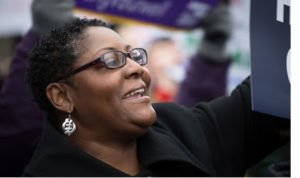 Rev. Aundreia Alexander, Esq. is the Associate General Secretary for Action and Advocacy for Justice and Peace for the National Council of the Churches of Christ in the USA (NCC). For over twenty years Rev. Alexander has worked with ecumenical, interfaith, and government entities such as the United Nations, World Council of Churches, Church World Service and others, on a variety of justice issues.  She received both her law and undergraduate degrees from the University of Missouri in Columbia. Rev. Alexander also has a M.Div. from Princeton Theological Seminary.