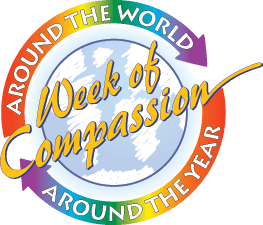 The best way to support those affected by Harvey is to give!
This recovery will take years, and volunteers will be needed throughout that time. Right now, however, outside volunteers are a hindrance to immediate relief efforts. In the coming weeks and months, once the local communities are ready, we will share about opportunities to volunteer. We will work with many partners including our local churches, Area ministers, Region and VOAD to respond to the rebuilding for years to come and will invite the church to serve. In the meantime, consider volunteering in another location where communities are still recovering from prior disaster (https://www.discipleshomemissions.org/missions-advocacy/disciples-volunteering/sending-teams-in-mission/).

A cataclysm, then a rainbow on the other side of this storm

By Rev. Caroline Hamilton-Arnold, Associate Director for Week of Compassion

Sometime in the middle of last week, I started tracking Tropical Storm Harvey – an “interesting” and “unusual” storm in the Gulf of Mexico. Over the next two days, the storm rapidly increased in strength from a tropical storm to a hurricane, the descriptors also increased in severity.

By this morning, newscasters were becoming adept at finding synonyms for “catastrophic.” No words seem to communicate the extent, the severity, the unprecedented reality of the situation in Texas. A good contender is “cataclysmic” – meaning, in various uses, “a sudden and momentous event marked by overwhelming upheaval and demolition,” or “related to a deluge.”

Harvey and its ongoing effects are certainly marked by overwhelming upheaval and undoubtedly relate to a deluge. As a disaster, it is the most severe weather event in the United States in over a decade. It will be days before the storm passes, months before we have a sense of the total damage, and years before the affected communities really recover.

According to recent FEMA estimates, more than 400,000 households have sustained damage, including dozens of families from our Disciples churches near where Harvey made landfall and in the greater Houston area. Several Disciples church buildings have also been damaged in the storm. At the time of landfall, and during the several hours of sustained Hurricane force winds, Iglesia Cristiana Betania lost their roof and had water damage to the sanctuary. Cypress Creek Christian Church in Spring, TX has severe flooding, and presumably several other churches across the Houston area do as well. (“Presumably,” because roads to the churches have been impassable, preventing confirmation of the damage pastors and members suspect.)

The more than 50 inches of rain have caused cascading emergency situations. The reservoirs that help control water flow in the bayous (which under typical conditions helps prevent flooding), are beyond capacity, causing flooding behind the dams and necessitating the release of water into bayous already running high. Creeks and streams continue to rise. Along the Brazos River, levees have been insufficient to hold back the cresting waters. As several of our Disciples pastors in the area have told me, “it’s bad, and it keeps getting worse.”

Another definition of cataclysmic comes to my mind, though, as I think of all I have heard from our friends and colleagues: from geology: “related to a sudden physical action producing changes.” True, the connotation of the word is still usually negative, but it brings to my mind a positive association as well. Disciples across the state (and, really, far beyond the boundaries of Texas) have taken actions that have produced changes.

Pastors, trapped in their houses by flooded streets – sometimes battling the water from their very doorsteps with trenches, buckets, and whatever means available – have ministered to their anxious and scattered congregations, through virtual prayer services, phone calls, and offers of shelter, if people can reach them safely.

Friends living thousands of miles away have connected people in need to people with resources who could help. Those few who had passable roads have taken blankets and towels to the evacuation shelters.

As of 9:30pm Central, Kingwood Christian Church was housing 70 people who were evacuated from the rising waters of Lake Houston, according to Pastor Amber Mattingly. Neighbors provided food and supplies, and so far, the power has stayed on. Even with the anxiety of the evacuation and the pressing task of finding 70+ air mattresses, those gathered at KCC took a moment to celebrate a birthday, complete with a cupcake and candle.

On the opposite side of the Houston metro area, Pastor Heather Tolleson is trapped in her house in Katy. She said to Week of Compassion staff earlier today: “I can’t get out. But when the storm passes in a few days we will use our church [First Christian Church, Katy] as a site for healing and to help rebuild our community. There is a rainbow on the other side of the storm.”

The last few days have been grim and heartbreaking. At the same time, we have witnessed once again the incredible power of compassion, generosity, and love of one another. As area minister for the Coastal Plains Area wrote earlier today, “We know that such a catastrophic disaster will take a very long season of recovery, and being bathed in the love and care from brothers and sisters in Christ will be instrumental in our healing and reclaiming of the peace and wholeness we all desire.”

Week of Compassion will continue to be in communication with Disciples in the affected areas and to monitor the ongoing situation. Together with the area and region, we are working to get support to the families and churches that have experienced damage from the floods. We are also looking toward long-term recovery, which we anticipate will take several years. Harvey has been cataclysmic, but we, followers of a Christ who broke even the bonds of death, know about actions that produce great change. We will continue to act, together.

Please consider donating to Week of Compassion to support these communities that have been impacted by Hurricane Harvey. 100% of your gifts designated for Hurricane Harvey will provide immediate relief and long-term rebuilding in the days, weeks, and years ahead. Thank you.